Cold War Commander - How To

This is a "how to" article I wrote for ODMS, giving the basics on how to play Cold War Commander. 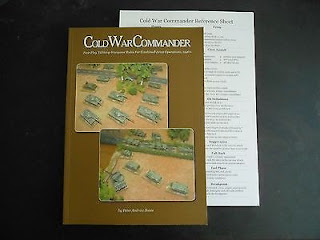 Cold War Commander – How is it played?

Cold War Commander, by Peter Andrew Jones, is a set of rules for modern conflict (1946 until today). It follows (and is very much similar to) Blitzkrieg Commander, which covers WW2. Both rulesets have a lot in common with Warmaster (by Rick Priestley), and Mr. Jones had Mr. Priestley’s blessing to write a set of tank and infantry rules. Other rules that are very similar, are the Warlord rules (Hail Caesar, Pike & Shotte, and Black Powder). All of these rules are currently very popular, in general, and here in ODMS.

For those not familiar with Warmaster, what that means is that the basic tempo of the game is this: players will take turns, and on their turn they will try to activate units.  Different command elements (HQ and CO) can make a dice roll vs. a target number (their command value) - if you pass the dice roll, you get to issue an order to some of your units (move, shoot, etc).  The strength of the system is that command structure and command level is a key part of the game, and you are never 100% sure of a plan (as in real life, friction and fog limit military operations).  The weakness of the system is that there are times when a player, or a side, will miss most or all of their command rolls - getting to do very little on their turn.  Very Frustrating!  Details are described below.

Cold War Commander (CWC) has several types of units. The biggest distinction is between combat units (infantry, vehicles, support weapons), artillery (which may be on or off board), aircraft, and command units. Let’s look at these in reverse order:

Aircraft units are of two types –

Artillery units can be off board (in which case it can be used for planned missions, or in response to the FAO), or can be on board. In either case, they are used for indirect fire, and can fire Barrage missions, or Concentrated missions (see artillery rules in the rulebook).

Combat units are everything else (infantry, support weapons, transport vehicles, tanks, etc). All are rated with several pieces of information. These include:

CWC is played in alternate turns. On a turn, you have four phases:

Initiative Phase – Recon units attempt to communicate with a command unit; then any units within the Initiative Distance of the enemy get a free action.

Command Phase – Now, command units may, one at a time, attempt to issue orders. Pick a command unit, and then pick a unit to receive an order (or group of units), and declare what the order is (“That unit of tanks will move to the ridgeline.”). Then roll the dice (2d6) vs. the command unit’s command rating. If less than the target number, the unit performs the commanded action, and that command unit may roll again. Note that the subsequent order can be to the same unit. Subsequent rolls are/may be reduced depending on who is being ordered again.

If the roll is a failure, that command unit may issue no more orders this turn. Once the CO fails his roll, the side is finished with Command Phase for the turn (hint: use your CO last).

End Turn Phase – Check for victory conditions, and then remove all hits from any units on the table that were not destroyed. Additionally, remove suppression markers from the active player (only).

Not every side, or every scenario will have Assets available. These are the pre-planned aircraft and artillery missions. The player who has them available must write down where the target of the strike is (based on the map of the game), and on what turn they strike. Different armies have different types of missions available (HE, Smoke, etc).

The orders that a command unit may issue to a combat unit are pretty simple. They are: move, deploy and fire. Note, these are the same orders (or actions) that a unit may do during the initiative phase.
When a unit moves in contact with the enemy, then that is a Close Assault.

When a command unit is issuing a command and rolls double 6’s – then a blunder has occurred. Not only does the order not succeed but based on what type of order it is (Artillery strike, Aircraft strike, or Command order) there is a roll to see what the blunder causes. Usually bad (like friendly fire).

Command units do not block line of sight.

Any unit that takes hits, must make armor saves (if it can). If there are enough un-saved hits to exceed the HITS rating of the unit, it is destroyed. Keep track of the number of hits a unit has taken, even if they aren’t enough to kill it. Other units may attack the same target this turn (although all hits are removed from all targets at the end of each player’s turn).

For each hit that was not saved, the attacker rolls the dice again, with the same “to hit” number. If any of the dice score, then the target is suppressed (mark it with a suppression marker).

NOTE: You can purposefully try to suppress a unit that you cannot cause hits against (like using a weapon marked * against a tank) – in that case the to-hit number is automatically a 6+. Saves are allowed. Unsaved hits are then rolled for suppression (again, 6+).
Suppression markers are removed from a player’s units only at the end of his turn.

A unit that is ALREADY suppressed (because it was attacked by another unit, which resulted in suppression), and which receives more hits, may fall back. Instead of rolling for suppression by additional unsaved hits (assuming that the additional hits are not enough to kill the target), the target unit rolls 1d6 for each extra unsaved hit, and falls back that many cm. If the unit has to fall back more than 10cm in a turn, it is destroyed (the crew/infantry abandon the field, hide, run away, etc).

The rulebook has a series of restrictions on close assault, but in general when a unit contacts an enemy, there is a close assault. AFVs can only close assault in the open, unless they are carrying infantry or support riders. Transports that close assault automatically dismount their infantry, in contact with the enemy, when the assault starts (except IFVs which may keep them on board)

Friendly units within 10cm can support the close assault, if they can draw a line of sight to one of the assaulting units in contact with the enemy.

Responding units can also have 10cm of supporters to fire back.

Once hits are rolled for (all close assaults hit on 4+, to determine the number of dice rolled, consult the chart on p. 35), determine which unit (on each side) takes the hits. Roll for saves if possible. Then compare outcomes and follow the results (also on page 35).

Close assaults are deadly. And can be unpredictable.

Machine Guns and Infantry Anti-tank Weapons (RPG-7, Bazooka, etc) do not need a deploy order before they can be fired.

Mortars and Recoilless Rifles must have a Deploy between moving and firing (to set up), and also between firing and moving (to break down).

Infantry units that have Anti-tank Weapons added on to them, may use their regular attack values, and their IATW attack values. IATW can only be used once per turn by a unit. Armored units do not get a saving throw vs. IATW (unless noted in the army list).

There are firing restrictions (see the rulebook, p. 24), and they can only be fired once per turn. If a unit is targeted by an ATGW, there is a dice roll to see if it can evade. This is one dice, vs. the same to hit number required for the ATGW to hit the target. If this evade dice hits, then the target may not evade.

Roll the attack as normal. However, if the evade dice misses, then the target saw the missile coming in, and may evade. It can move up to 10cm in any direction, and the to hit number against it gets worse by one category (i.e. – if in the open, it is treated as in soft cover, etc). If the unit was already in full cover, or if the 10cm move can get it out of LOS, then it cannot be struck.

There is a lot more to this ruleset, but the above presents the basic ideas required to play. Some things are often forgotten (like Initiative Moves, Recon communication, and how to do Close Assaults).

These are a reminder for those items. In all cases, consult the rules. These aren’t hard rules, and players will get the hang of things in a turn or two.
Posted by cturnitsa at 12:54 AM

thanks for the summary. I wanted to go back to the rules, your blog put me right back on track.
Much appreciated!

Thanks Braxen - I hope you get in some games of Cold War Commander. Let me know if you publish a battle report.