Let me first start out by saying that the title for this series - the Ancient Army Lists (for Niel Thomas' rules from Wargaming: An Introduction) is a bit of misnomer for this particular entrance in the series.  By this point in his timeline, Thomas has moved on from the ancient world, into the firm middle of the Medieval world.  The armies covered here are those involved in the middle and later Crusading period.

As a reminder, the earlier articles in the series are:

As I pointed out in some of the earlier articles, there are many additional lists for each of those periods covered in the longer, and more complete, treatment on the topic in Thomas' book dedicated to this period - Ancient and Medieval Wargaming.  Those rules have a little more to them, and a little more nuance, than the rules in the Introduction book.  Having said that, in many cases the army lists will transport to the earlier book.  What is different, is the grouping of the periods.  In his more advanced book, Thomas, for instance, groups what are here list periods I, II, and III into one chapter, entitled the Classical Period.  The army lists covered here from the Introductory book are present, with additions of other armies from the period such as Parthians and Numidians.

What is interesting, however, is that the army lists from the Introductory book jump from the Imperial Rome period, all they way up to a thousand years later, into the Later Crusades.  Absent are Late Antiquity, the Early Medieval period (or Dark Ages), and of course the Viking Age, if you choose to interject such between Early and High medieval periods.  There are some fascinating armies and wargaming possibilities covered in that millennium between Second century AD and Twelfth century AD.

However, space in the Introduction book is limited, and perhaps a better choice of Medieval representation could not be made than to cover the Crusades - an iconic chapter of medieval warfare that is always popular.  Thomas skips a general introduction to this period (covering 1180AD - 1290AD), rather he chooses to get right into the first army list - the Later Crusader army.  This is representing the Western Europeans armies on crusade in the Levant, during the events generally thought of the Third through Sixth crusades.  This covers the battles of the Crusader states (Kingdom of Jerusalem, Principality of Antioch, etc.) as well as the battles between Richard the Lionheart and Saladin.  It continues to cover the armies of the west, up until the events of 1289 (Tripoli) and 1291 (Acre). 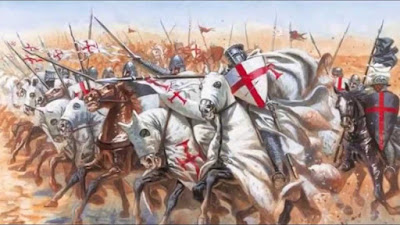 Here is a list of the units in the Later Crusader army:

This army has two special rules associated with it: 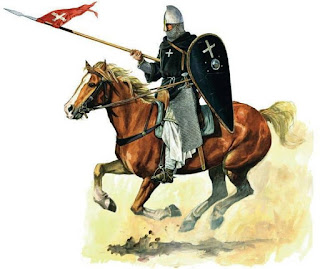 The Later Crusader army is for the player that likes to charge his enemy, and stomp him into the dust.  Not that this will always work, but it is hard to envision the army being successful any other way.

The army list that is presented as an opposition to the Later Crusaders, is the Saracen Army, which can represent the different armies of the region who were opposed to the Crusaders and their establishment of states and principalities (Saladin's Ayyubid Egyptian army, or the Fatimids, Khwarismians, or even the Mameluks).  This army is an interesting foil to the Later Crusader army. 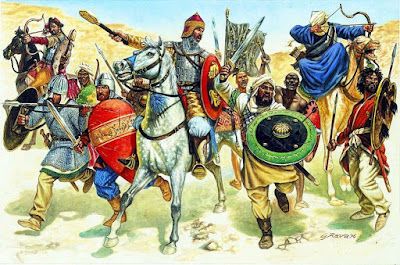 The Saracen player can choose his army from these units:

The general ruleset does not allow Heavy Cavalry to be armed with bow, however that and some other concerns are covered by special rules for this army: 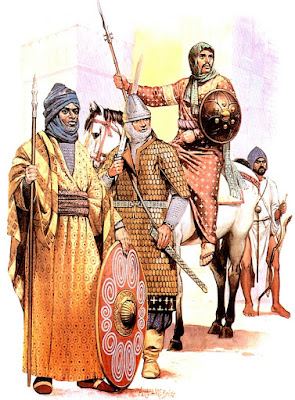 This army allows for, and may demand, considerable more finesse than the Later Crusaders army.  Every unit is armed with a bow, which helps, however with the exception of a pair-up between Turcopoles and Turcomans, the Later Crusader has better armor, and often, better morale.

A really interesting battle would be between a Fatimid army (this list) and a Sunni foe, such as the Ayyubid army (also this list).

Finally, this section also introduces a third army.  The Mongols, which are according to the author fought just about everyone (including the forces represented by the Saracen list given here), except for the later Crusaders.  More about that below... 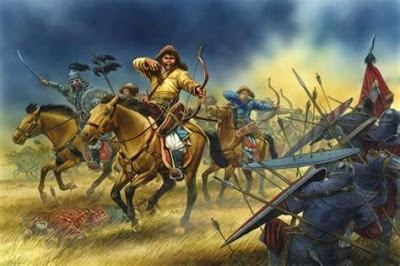 The Mongol player has this army list to choose from:

This is an all mounted force, unlike the Saracens which include infantry archers.  It will make for an interesting foe to fight the Saracens, and others.  The army, as presented in the book has a few special rules associated with it: 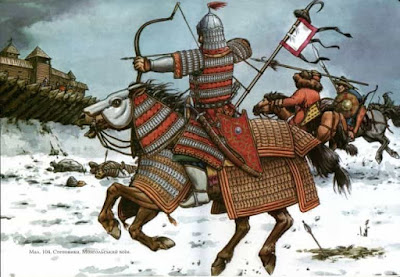 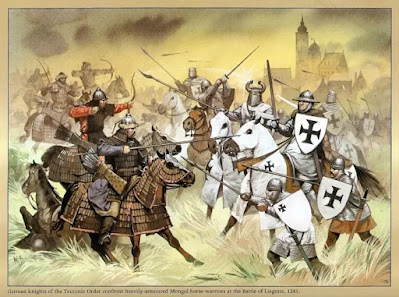 This army has two special rules associated with it: 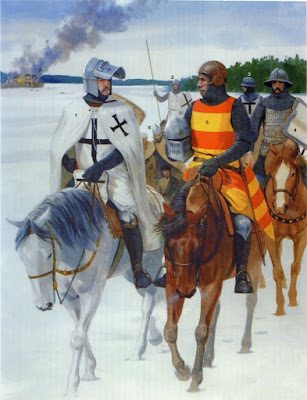 This last army list could be a challenge to the Mongols.  It would still have a hard time in the battle, as the Teutonic Order did have a hard time vs the Mongols in history.  With the Fanatic Order knights, and the Elite other knights, this is an interesting mix of morale grades, but it would be very interesting (and fun) to field.  Maybe a playtest should come up soon...
Posted by cturnitsa at 11:13 PM