Over the years, I have used Diplomacy maps (especially variant maps) for a number of different wargaming purposes.  Many years ago, I ran a very fun 9 player campaign using Hordes of the Things for tactical battles, and the Diplomacy variant map, Bretwalda for the campaign map.  That map, and the Diplomacy rules for it were written by Geoff Bache.  Geoff also write another British Isles Dark Ages variant, named Heptarchy IV which features 7 kingdoms.  Those kingdoms are listed here:

Each of these starts the campaign with 3 military units (which may be armies or fleets), except for Mercia which starts with 4 units (but has the advantage of having the most neighboring kingdoms). 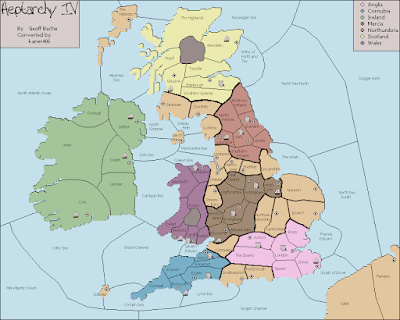 Here is a simple framework set of rules for a campaign. You may want to add more to this.

If you try this, please let me know the results.

Posted by cturnitsa at 2:44 PM