The fourth period that Neil Thomas covers for his Ancient Warfare rules in Wargaming: An Introduction is focused on the Imperial Roman period, or as it is titled in the book, "Imperium Romanum: 25 BC to AD 130".  This covers the Roman army, following the Marian reforms (which took place during the Republic Period), and beginning in 25 BC with the rise of Augustus as the first Caesar of the Imperium.

This period is focused on the wars between the Romans and their more northern Barbarians, the Germans and the Gauls.  The period starts, as stated, with Augustus, so after Julius Caesar\"s famous campaign in Gaul, however the army list looks very much like it could be used to represent Julius\" famous exploits.

The author presents the fact that at the scale of the rules, the differences between the two armies (Gauls, and Germans) are negligible.  Other rule sets, such as the classic WRG army lists, present differences in troop types, morale, training, weapons, and even fighting density (the Germans generally being in denser formations for most of the represented tribes).  Those rules (the WRG rules), however, have a much more tactical focus, than these, in terms of classifying the troops.  Here, Thomas has taken the approach similar to Phil Sabin in his works (such as Lost Battles) whereby ancient infantry is simply divided up into heavy infantry and light infantry (based on the fact that heavy infantry is expected to stand in the battle line).  One further distinction made, at least here, is with Warband, which are somewhat lesser heavy infantry, but also with the ability to fight well in rough terrain. 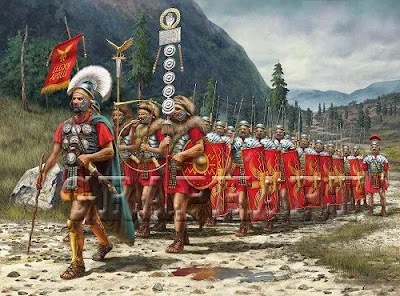 The Roman army here is represented by the following units:

The Roman player is then presented with fielding a battle line of Legion units, with a few support choices.  The Elite cavalry is nice, possibly representing mercenary or feoderati tribal cavalry, but with better equipment (hence the medium armor).  But, it is not present in sufficient numbers to deliver a winning battle, only a supporting role.  This leaves the Roman player in the enviable position of playing an archetypical Roman battle plan - a steady onslaught of well equipped, well trained infantry. 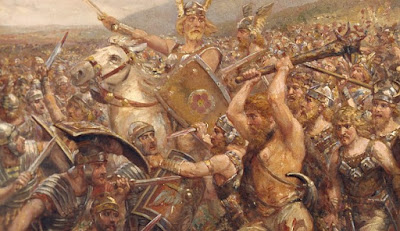 The Barbarian army is composed of the following units and availability:

The Barbarian player is faced with the fact that his army is outclassed, as in real life. He must rely on a ruse de guerre or clever use of rough terrain, in order to balance the odds.

Several options exist for a more balanced game. First, the Barbarian player may be given either a few additional units, or additional rough terrain.  Second, the Barbarian warband units can be made larger (6 stands), this is what the Tactica rules do.  Third, battles could be fought as part of a campaign, or series of games, with the Romans having a more difficult time of recovering losses between battles.  I had an article in Yaah! magazine featuring such a campaign for Commands and Colors, it would work with these rules, as well.

There are many other possible army lists available for this time period, some of which are in Thomas’ longer book on Ancient and Medieval Wargaming, but here these are the only two.  Satisfying games could be fought with Roman v. Roman, as a civil war or rebellious province scenario. Equally, a war between two Barbarian tribes might be fun.

For fun, and to recreate a British Barbarian army, replace the Cavalry and Chief’s Bodyguard units with Light Chariots (make one of them Elite). That should give a satisfying Boudicca’s revolt feel.