Not a lot to report on the miniatures front, although that is about to change.  Over the summer I played a half dozen different SAGA games, and at Call to Arms (the October wargaming convention in Williamsburg) I was able to play a game of SAGA.  That game, I was playing my friend Stephen from the ODMS club, and he was running Pagan Rus.  I was running (for the first time) plain old Vikings.  I managed to eke out a win, and I suspect my reliance on large units (a lesson I learned while running my Anglo-Saxons) helped -I had two 12 man units of Warriors.  Plus a 12 man unit of Levy, and a 4 man unit of Hearth Guard/Berserkers.

Previously I ran a game at Guns of August (at the Virginia War Museum in Newport News).  My game was a 28mm skirmish game of Romans vs. Germans, a follow on small skirmish after the Teutoburger Wald forest battle.  The figures were an assortment of different Foundry barbarian types, and the Romans were a mix of different manufactures.  The rules used were the Song of Blades and Heroes, using just historical troop types.  It wasn't my cup of tea, but I admit I should try the rules again.  I am inclined to think I would much rather play something like an adaptation of Lion Rampant, or even Warhammer historical.

Our club, which historically had been a Thursday night club, now has groups that meet on Tuesdays and Thursdays. The Tuesday cadre has a dedicated group that plays Warrior 15mm ancients every week.  The other part of Tuesday nights are boardgamers - Settlers of Catan, and that sort of thing.

Now, coming up I have two miniatures games planned.  The  first will be a 15mm version of Freeman's Farm (part of the Saratoga Campaign, 1777).  I had thought of using Black Powder for this game, which I enjoy, but instead I am going to use the much easier Neil Thomas rules.  There is an excellent fan version of his rules (based on the Napoleonic version, but with more concentration on Linear Tactics), covering 18th century, with some lists of troop types for the American Revolutionary War.  I will use those rules, although there is a peculiar feature of them.  That is, formed infantry cannot charge other formed infantry, unless that target unit is smaller.  This rule exists in several of the horse and musket era Neil Thomas rule sets, in order to push the idea of the musketry firefight.  Two units that approach, have to stop and exchange firepower with each other, before one goes charging in.  Pretty historical, but different from what most wargamers expect. 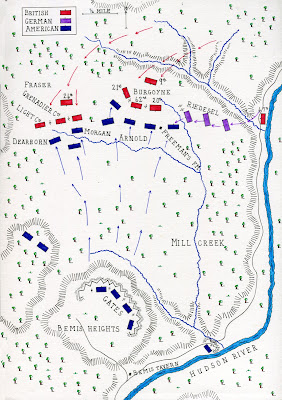 For the scenario, I am consulting a couple of wargaming sources I have - the scenario guide for British Grenadier, and also the battle description in the 1st edition Black Powder rulebook.  For historical sources, I am looking at 'A Guide to the Battles of the American Revolution' and some internet sources such as British Battles.

There is a Freeman's Farm scenario for Tricorne (the Commands & Colours variant for AWI), that I might play before I run the game (solo, probably). Just to get some more insights into the battle, but a Tricorne scenario is at a different level of abstraction/scale than a miniatures battle. 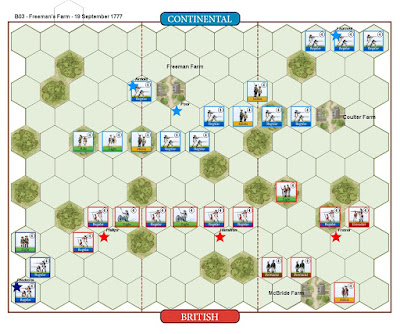 The portions of the battle I want to focus on are Fraser and Burgoyne on the British side, and Arnold, Morgan's minutemen, and Dearborn's lights on the American side.  I will probably omit Reidesel, although the Hessians would make an interesting part of the scenario, they don't show up until late in the day, and might present a balancing problem for the scenario.

Denbigh Fusiliers in the Sudan

The other game I have planned, is a game of The Sword and the Flame in 28mm.  This will be held on the Friday of Thanksgiving weekend. The battle is a company of British regulars (the Denbigh Fusiliers) moving through some territory where British and Egyptian friendly villages have raised a small makeshift militia to defend against the Mahdists that are overwhelming the region.  Almost like a "Magnificent Seven" or "Seven Samurai" type scenario - but instead of 7 heroes helping the villagers to defend themselves, here you have two platoons of Tommy regulars in Khaki helping to fight off the Dervish attack.  The scenario is called "Friendly Territory" and is the first battle of the "Denbigh Fusiliers" mini campaign.  It should be fun.  More as the game approaches. 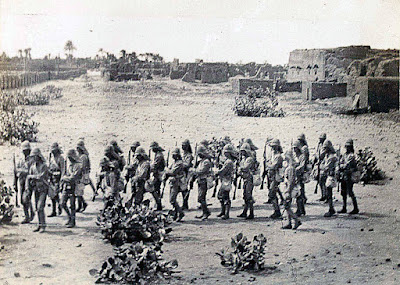 Posted by cturnitsa at 3:42 PM